Considering the Destination Point relevance of a Transportation Hub, the Project also envisioned converting the Coliseum building into a sports-themed and entertainment-themed structure for amateur sports and non-represented minor-league and semi-professional league entities.   These facilities would further be complemented with themed retail shopping outlets and delis, pubs, bistros, restaurants, and bars.

In order to effectuate and support these new venues, and make them more aligned with adjacent communities, the Project also entailed a major re-working of Alberta Avenue, especially that portion to the west of the Coliseum building.   These changes would include:

– Making ALBERTA AVENUE a Pedestrian Thoroughfare from the ERiTH build-out to 86th Street (initially, continuing all the way to the Northern Alberta Institute of Technology over time).
– The City of Edmonton would be called upon to expropriate land north of Alberta Avenue between 78th and 80th streets to allow for a new road connection to 119th Avenue for 2 vehicle lanes westbound.
– Using Northlands property south of Alberta Avenue between the same streets, a similar connection would be made to support 2 lanes of traffic eastbound.
– Along the 2 newly created one-way thoroughfares, a 50-foot wide strip would be preserved for a “Buffer” planting — trees, landscape features, a meandering pedestrian trail and a bicycle path.
– The City would amend zoning designations along the Alberta Avenue “spine” to allow for increased density and mixed use (commercial office, retail, hospitality, and residential) — the highest density adjacent to Alberta Avenue, decreasing northward and southward away from the pedestrian-oriented spine.
– The densest portion of the zoning along Alberta Avenue would allow for mixed use development up to 30 storeys, the first three podium levels dedicated to a “Western Facade” theme, harkening back to the areas first settlement days.
– Cross streets (with the exception of 82nd Street) would be closed and sold to developers with two provisional developmental caveats: 1. Provision for a 130-seat publicly accessible auditorium; and 2. abandonment of the “Western Facade” theme for these nodal developments.
– The Central zoning strip mid-block north and south of Alberta Avenue would be zoned for mixed-use developments up to 15 storeys; the far-end of blocks north and south of Alberta Avenue would be designated for mixed-use density up to 6 stories.
– All vehicle access to the rejuvenated area would be directed from existing streets, not directly off of 119th and 117th Avenues.
– Densified, automated parking would be built under the pedestrian spine of Alberta Avenue — a City of Edmonton revenue generator — and extended under the nodal properties at street ends, thereby connecting all developments together, parking-wise.
– Retail/Hospitality storefronts would be limited to 25-foot widths, creating pedestrian-scale diversity along Alberta Avenue, activating the street; Office and Service functions would be relegated to upper podium floors.
– The apex of the “Y” created by the connection of vehicle ways to 119th Avenue and 117th Avenue would be reserved for a “Grand Thematic Structure” with plazas, piazzas and landscape features in the mode of a “Great Central Promenade.”   Three sites in the annexed land would be reserved for major hotel developments.
– An intensely designed pedestrian “Living Bridge” would span 82nd Street, maintaining non-vehicular continuity along Alberta Avenue.   The whole of the Alberta Avenue pedestrian way would provide space for annual events (e.g. exhibition midway) and for community gatherings such as farmers markets.
– A long, multi-level pedestrian “Event Bridge” would span the Alberta Avenue underpass and the LRT right-of-way to connect the Eastern portion of Alberta Avenue with the Western portion and with the ERiTH build-out.
– Along Alberta Avenue, new street lighting would be integrated into facades of new development, entirely pedestrian in scale. 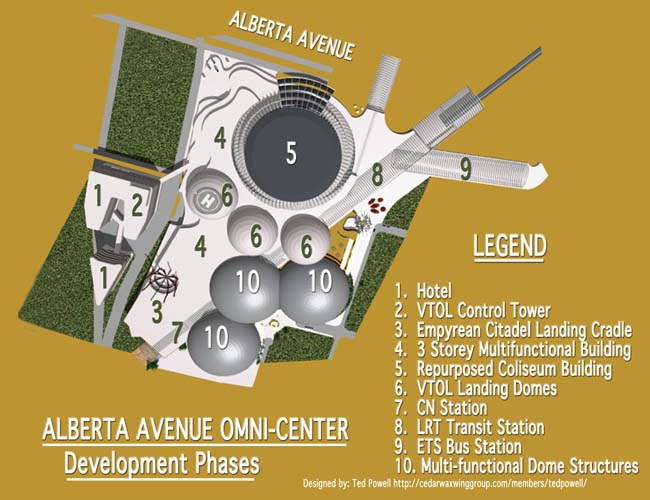 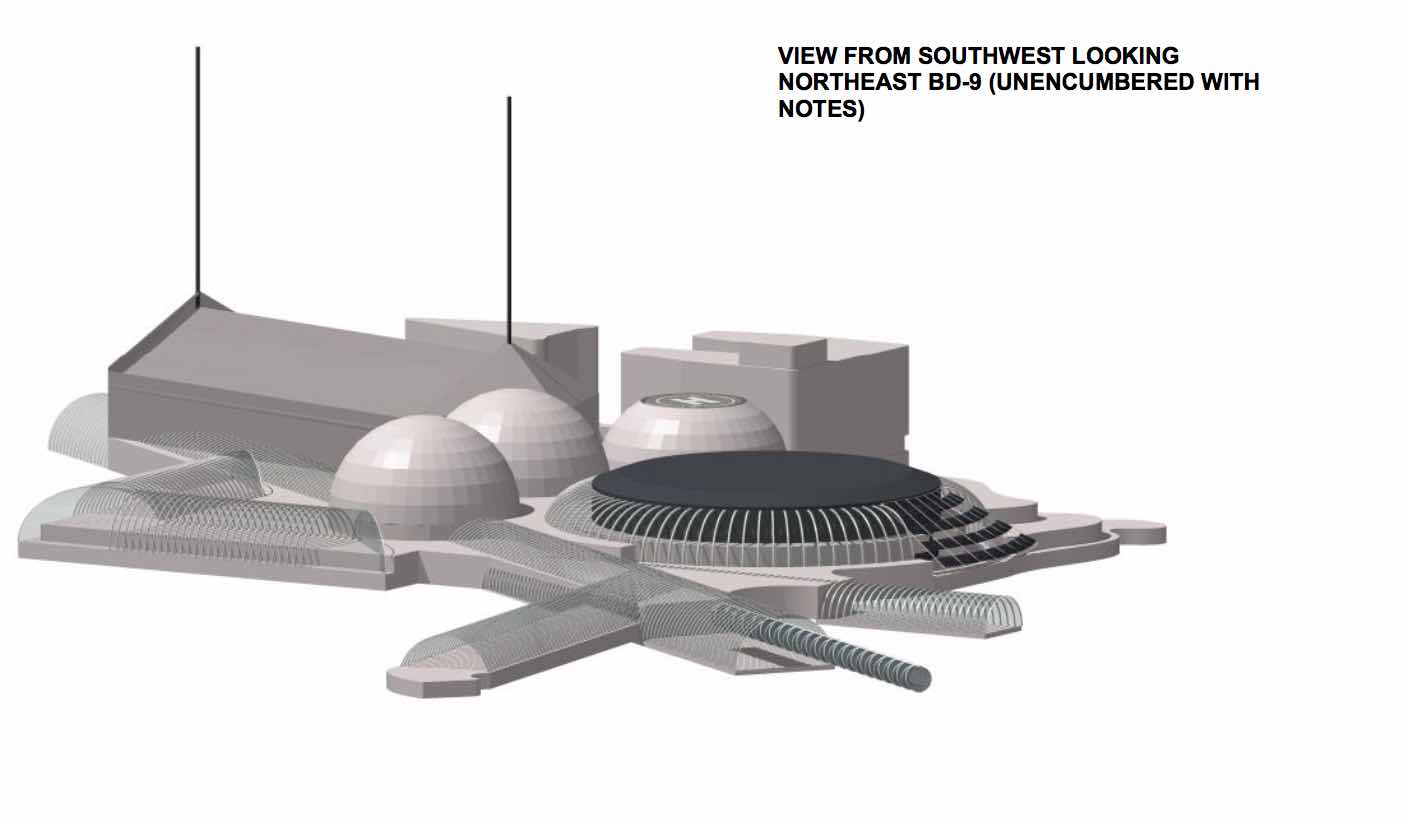 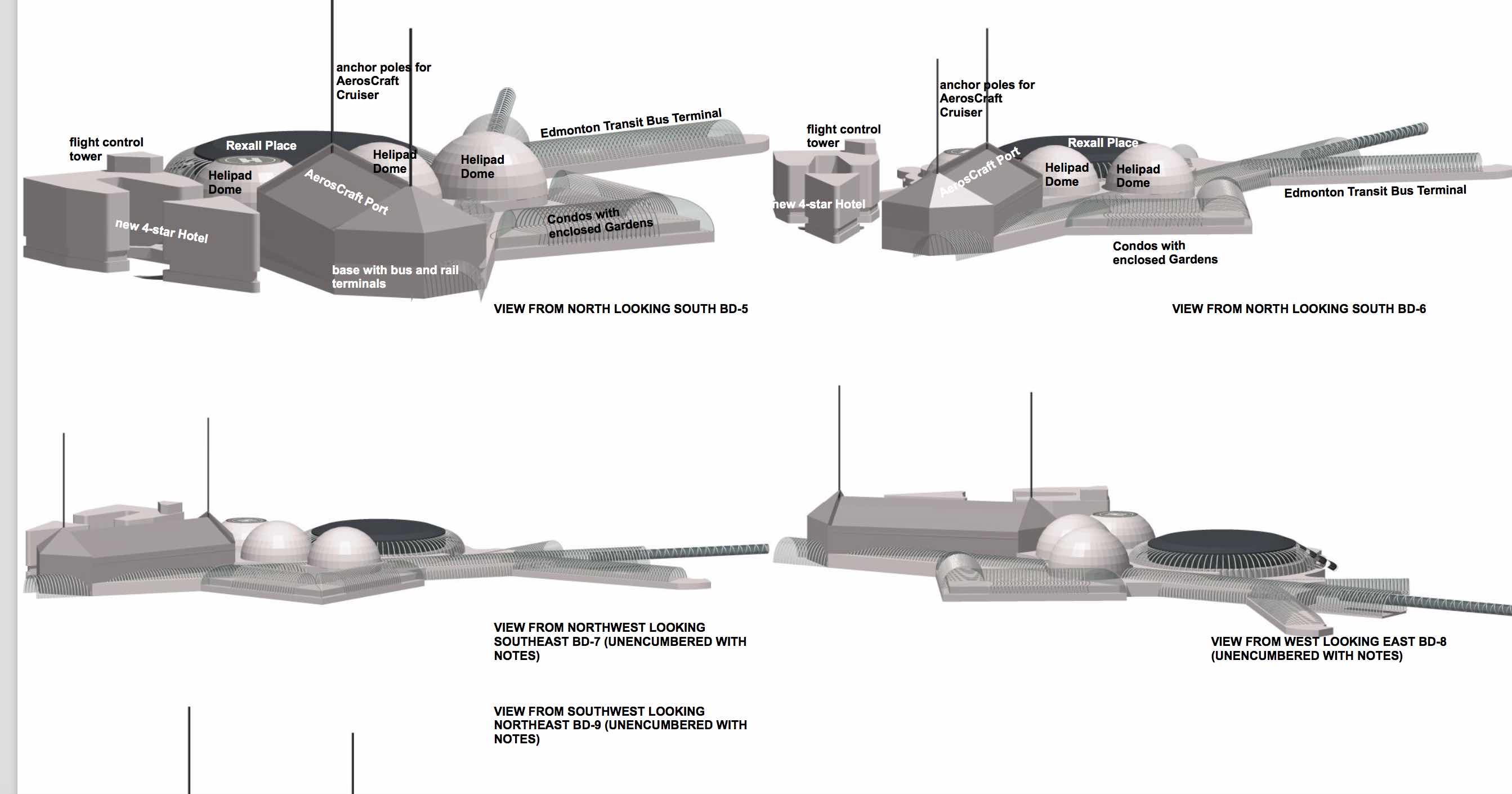 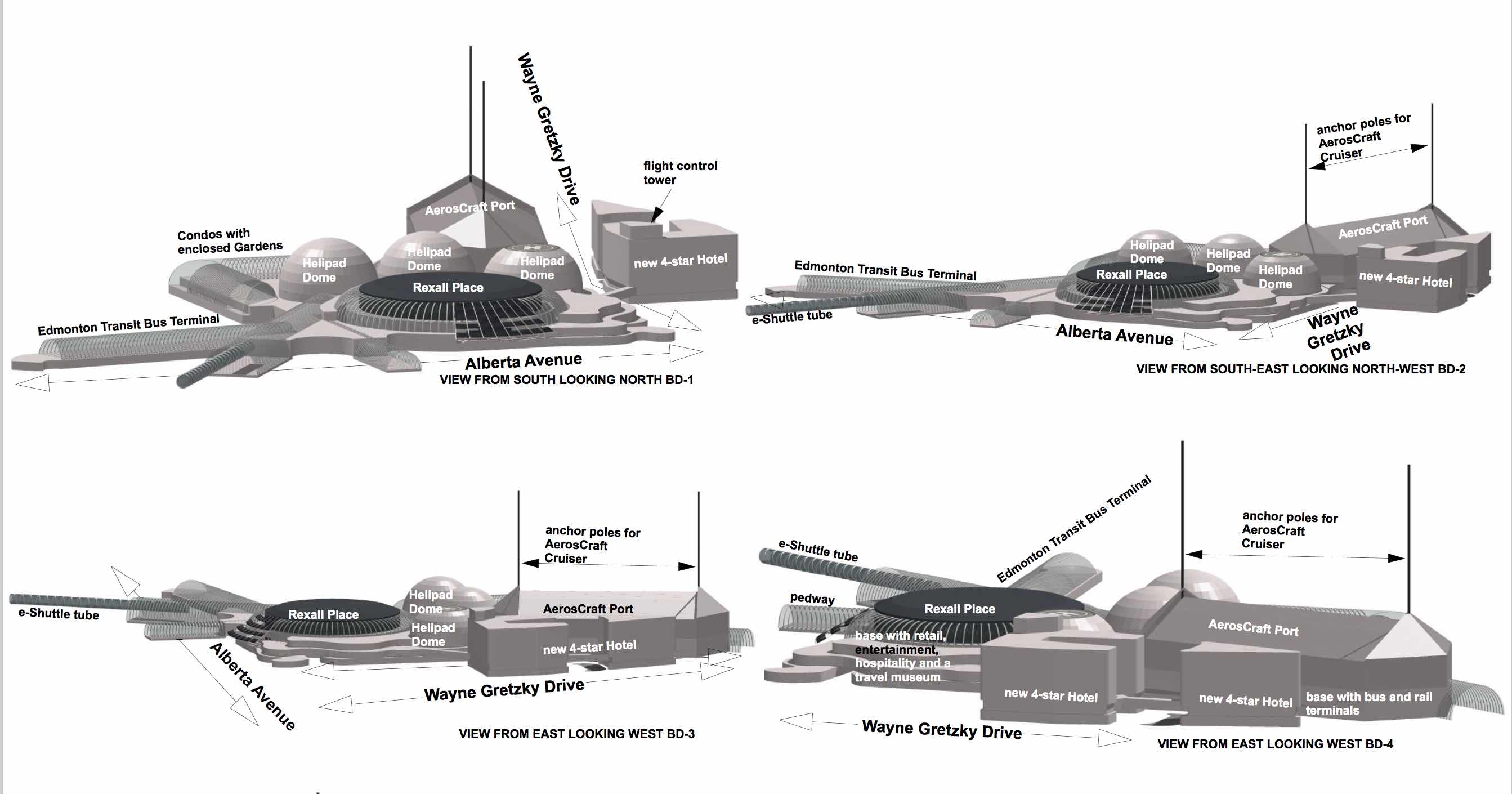